At the bottom of a lush river valley running through the little town of Tampaksiring just northeast of Ubud, lies one of Bali‘s largest ancient temple complexes, the Candi Gunung Kawi. Comprising a collection of ancient ‘Candi’ or shrine reliefs carved directly into the face of a rock cliff, this is definitely one of the most stunningly unique archeological sites besides being an important sacred place for the Balinese.

Gunung Kawi was also on the 44th US President Obama’s itinerary when he and his family holidayed in Bali in late June 2017. Overlooking the sacred Pakerisan River, which also flows by the Tirta Empul sacred Water Temple a kilometer up north, the main complex consists of 10 shrines – memorials cut out of the rock cliff face in imitation of actual buildings. They stand in awe-inspiring 8m-high sheltered niches cut into the sheer cliff face.They take their general form from the free-standing ancient temples or Candis of East Java, which show very similar architectural forms and decorations. There are four shrines on the west side and another five on the eastern side of the river, while to the south across the valley hides another.Evidences suggest that these Candis were probably once protected between two massive rock-hewn cloisters.

In their shape, the candis resemble small buildings surmounted by massive three-tiered roofs bearing nine stylized lingam-yoni fertility symbols. Each candi actually looks like a doorway, carved in relief, but going nowhere. Instead, there is a small chamber beneath the candi, accessed by a sloping shaft from the front, in which a stone plaque (peripih) with nine holes containing symbolic offerings of food and metal objects, representing the necessities of earthly existence, were placed.

Small stone caves that actually serve as meditation sites complement the shrines, where Buddhist monks used to sit and contemplate. Indeed, Balinese history has shown that the two religions coexisted and sometimes fused in harmony. Across the river and beside the first rock shrine complex is the functional temple courtyard that the locals essentially refer to as Pura Gunung Kawi. Inside are what you would commonly find in any other Balinese temple courtyard, complete with various shrines surrounding the temple’s main grand pavilion or ‘bale‘. To reach the temple from the main Tampaksiring highway, be prepared to descend hundreds of steps before you reach the temple complex. As with any other temple visit in Bali, and especially to temples held sacred, proper attire consisting of a sarong cloth with a sash around the waist is required for all visitors, while women during their periods are not permitted entry into the Gunung Kawi Temple complex. The sash and sarong are available for rent at the ticket purchase booth before the stairs down to the valley. During the ‘piodalan‘ temple anniversary every year the temple is beautifully decorated following the Purnama Katiga or ‘third full moon’ on the Balinese calendar, allowing for a most festive and exotic setting for photographs. 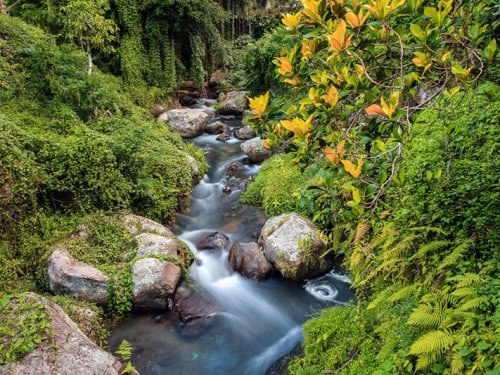 Dedicated to the kings from centuries past, the complex radiates a certain mystical atmosphere of ancient legends and long lost tales of forgotten Balinese kings.Legends relate that the whole group of memorials was carved out of the rock face in one hard-working night by the mighty fingernails of KeboIwa, a renowned military commander in ancient Balinese Kingdom who possessed supernatural powers.

The candis of Gunung Kawi are believed to have been constructed in the 11th century (1080 AD) by King Anak Wungsu in honor of his father, the great Balinese ruler Udayana and the Warmadewa Dynasty. According to history, the monuments on the eastern bank are dedicated to King Udayana, Queen Mahendradatta and their sons Airlangga, AnakWungsu and Marakata. When AnakWungsu ruled Bali, Airlangga ruled eastern Java. In history, Airlangga was known as the legendary king of the kingdom of Singosari, whose remnants can still be seen not far from Surabaya.

The temple complex is easily accessed, only a few hundred meters east from Jalan Raya Tampaksiring main route, from where you continue down on foot to a paved walkway that is lined with art shops and small local warungs. Along a further 300 steps towards the river, lush paddy terraces and gorgeously green valleys blend to transport you back in time away from modernity. Where the stairs end, proceed through a stone archway with small pillars each holding an earthen vase filled with holy water, which you sprinkle on yourself before entering the complex.