The Garuda Wisnu Kencana Park, simply known as GWK, sited on the Bukit Peninsula, the limestone plateau with beautiful and serene park southern Bali. The cultural park is dedicated to embrace as well as preserve for art, cultural and spiritual aspects of the Island of Bali. Set in 250-ha this park becomes one of the favorite places for art & cultural performances, exhibitions, and conferences. GWK offers a breathtaking view spot for tourist to spend the day enjoying spectacular sunset.

The main icon is the incredible monument of Garuda Wisnu Kencana , the tallest and largest modern statue with 120 meter tall and 64 meter width, conceptualized by Nyoman Nuarta, an Indonesia’s finest modern sculptors. The statue is depict the Hindu God Vishnu riding aloft on his winged mount Garuda. Vishnu is considered a member of the holy trinity of Hinduism along with Shiva and Brahma. He is the most important God of Vaishnaism, the largest Hindu sect. Garuda is a bird creature from Hindu mythology that has a mix of eagle and human features. Garuda Wisnu Kencana statue surrounded by more than 60-ha of Cultural Park.

Both projects are initiated by Garuda Wisnu Kencana Foundation with the vision of becoming the landmark of Bali’s world known tourist destination. GWK is now offering number of facilities ideal for various types of events both local and international.

The commercial complex feed and entertain Garuda Wisnu Kencana’s visitors such a highest ground area of Wisnu Plaza , culinary and shopping path of Street Theatre, the main venue Lotus Pond, Traditional Balinese performance at Amphitheatre, Indraloka Garden, Tirta Agung where the sample of Vishnu’s hand is located here, as well as Boutique & Souvenir shops that has completely set. Visitors also can share their memorable moment with Balinese traditional outfit in GWK Photo Studio. GWK can be challenging area to cover. If you don’t have enough time or energy for walking around do take a “Segway” advance two wheel vehicle and try gliding around the area. The scenic restaurant Jendela Bali is open for business and provides authentic Balinese food and daily entertainment while a new additional restaurant, The Beranda, serving an all-you-can-eat buffet with overlooking Jimbaran Bay.

Ubud Traditional Art Market locally referred to as ‘Pasar Seni Ubud’ is located opposite the Puri Saren Royal Ubud Palace and is open daily. Ubud Art Market is the best art market in Bali, where you can find beautiful silk scarves, lightweight shirts, handmade woven bags, baskets or hats; statues, kites and many other hand-crafted goods.

Most of the goods found at the Ubud Traditional Art Market are made in the neighbouring villages of Pengosekan, Tegallalang, Payangan and Peliatan. The location of the Ubud Traditional Art Market which is centred among the art producing villages, and being just opposite the royal palace which is a centre point to Ubud itself, make it a strategic shopping place for Balinese handicrafts and souvenirs.

The Ubud Traditional Art Market also serves as a setting for the Hollywood movie Eat Pray Love, which shows a scene where actress Julia Roberts opposite a male character strolling through the stalls which are frequently visited by foreign and domestic visitors in real life. Naturally, bargaining is essential.

anggu Beach, The Surreal Experience of Beauty of It’s Shores

Among Bali’s numerous beaches, Canggu Beach was recently chosen among CNN’s “World’s 100 Best Beaches” in position no 39. Located in the village of Canggu in North Kuta, District of Badung, quite close to Legian beach, Canggu offers a wide stretch of black sand beach that is world-famous for its magnificent surf. In 2004 Canggu Beach hosted the Indonesia Surfing Championship (ISC) chosen for its barrelling waves as well as the beauty of its shores. On the other side of the blue surf one can see tiers of lush green rice paddies where flocks of birds come to fly over or roost. This panoramic scene is rarely found along other beaches and therefore offers a unique experience for its beholders. 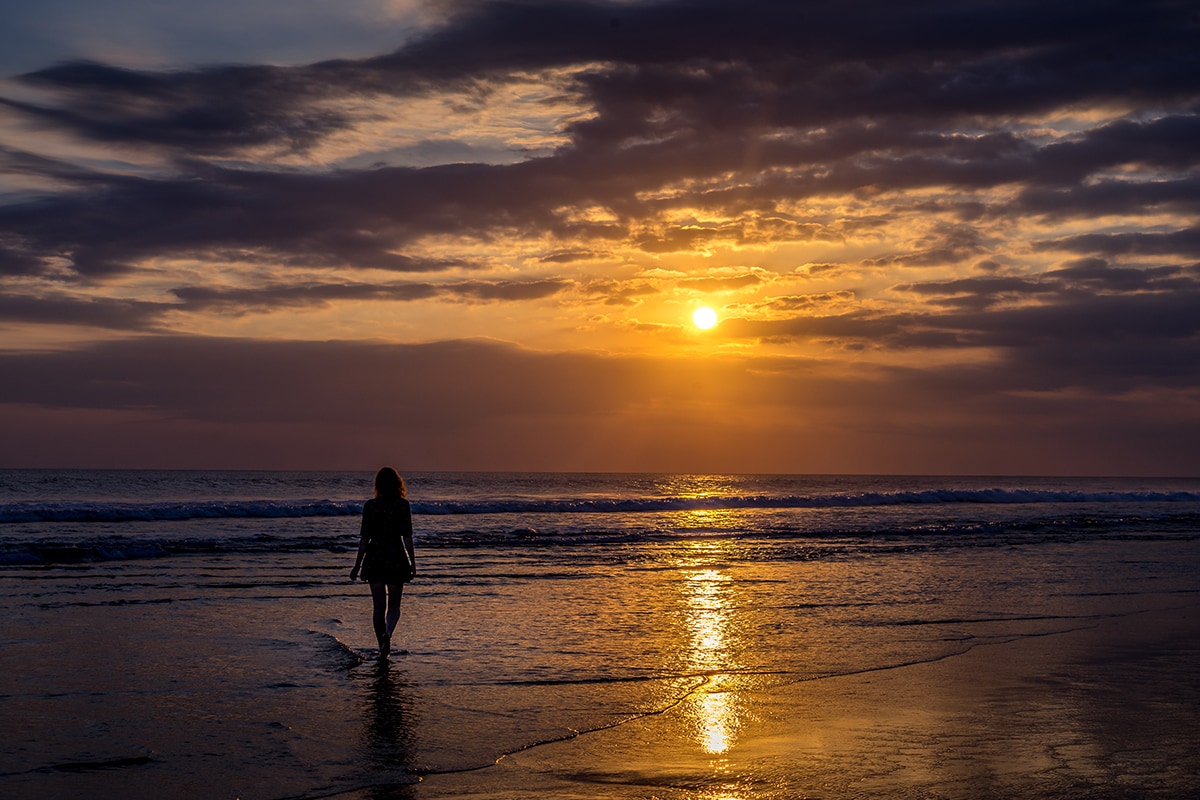 Sunsets at Canggu can also be quite a surreal experience. Do not forget to enjoy the barbequed corn while watching the sun slowly disappear beyond the horizon. Canggu still remains a rural area, where you will be able to experience the simple Balinese village way of life. It takes only some 25 minutes from here to the famous Tanah Lot temple and some 20 minutes to Seminyak for those who yearn for more exciting nightlife and loads of shopping. At present Canggu continues to improve its facilities, there are already a number of hotels, villas, restaurants, and cafes available to spoil any visitor. 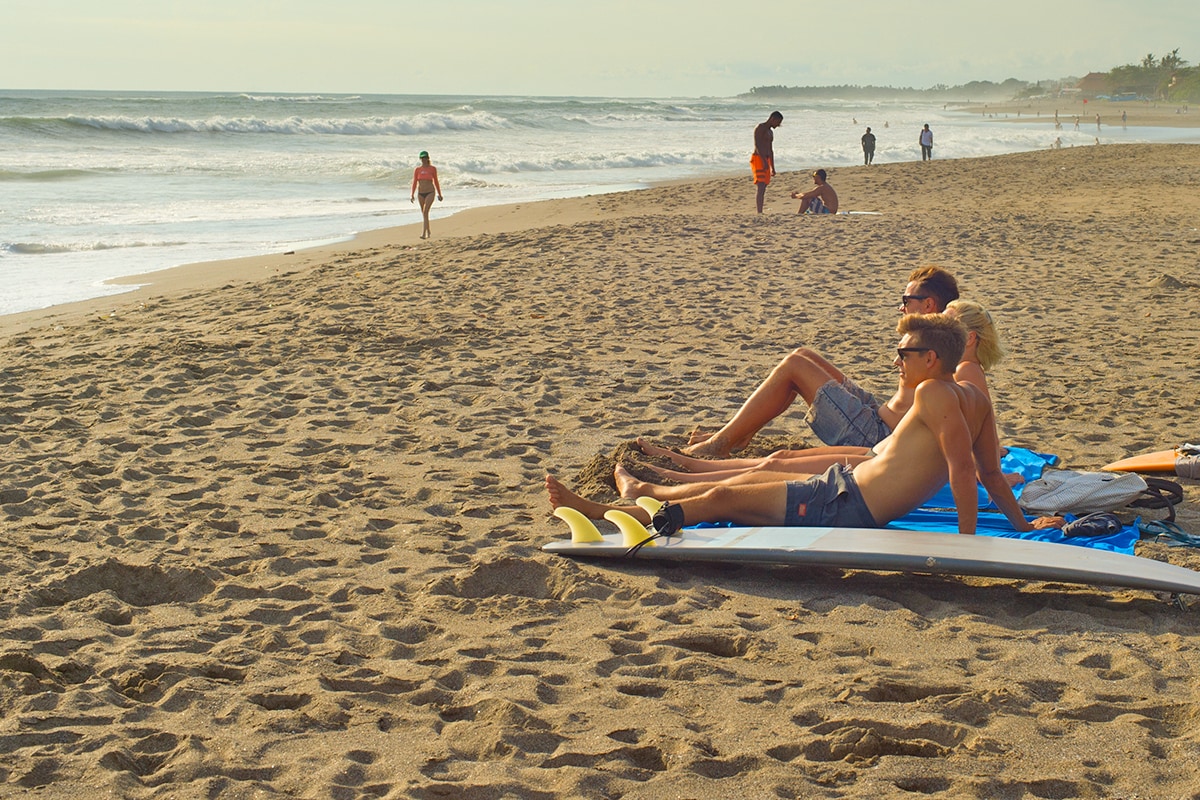 Located some 18 km from the city of Denpasar, Canggu Beach can be reached in 45 minutes by car from Bali’s Ngurah Rai International Airport. When you drive from Kuta Beach it will take only 20 minutes to reach the village of Krobokan. Then turn left until you reach ricefields that touch the ocean. Then you know you have arrived at Canggu. Canggu lies 25 minutes north of Seminyak and is halfway to Tanah Lot. It is advisable to hire your own car or make sure that your hotel can pick you up from the airport.

Set within the highlands of the mountainous Bedugul Regency in Bali, atop a plateau that sits on Lake Beratan, stands the majestic Ulun Danu Temple. In the mild, mountain weather, approximately 1,500 meters above sea level, the air is crisp and cool. The stunningly clear lake is calm and almost perfectly still, save for the soft breeze that occasionally sweeps across, creating tiny ripples upon its surface. A thin mist rises from the lake and hangs in the air, surrounding the temple, giving it a somewhat surreal appearance.

Pura Ulun Danu was built in adoration of the Goddess Danu. Danu, in the Balinese tongue, means lake, while the goddess Danu is queen of water, lakes and rivers. The temple complex consists of four sacred buildings. Linga Pura stands three levels high, and is a place of worship to the god Shiva. Pura Puncak Mangu stands 11 levels high, and was built in dedication to the god Vishnu. PuraTeratai Bang is the main temple, and Pura Dalem Purwa is built in worship to Sang Hyang Widhi. This last temple is also a site for those who pray for fertility, prosperity and well-being.

The style of the building follows the Trimurti belief; three holy colors to represent the three gods: Shiva, Brahma and Vishnu. The first color is red, to the lord Brahma, The Creator. Second, is black. The symbol of the lord Vishnu, the balance and preserver of the universe.Finally, white for the god Shiva, The Destroyer.

The area surrounding the temple is believed to have been a site of worship and center for religious rituals since the megalithic period. To the left of the temple lies a sarcophagus as well as a stone slate that are dated to around 500 BC. The existence of the temple itself is has been recorded as early as 1556. In 1633, it was rebuilt by the King of Mengwi, I Gusti Agung Putu,  with a mixture of Hindu and Buddhist architectural styles. Despite its age, the temple remains clean and in good condition, well kept by the local community. Ulun Danu Temple is one of the icons of the island of Bali, and is pictured on the 50,000 rupiah bill.

Lake Beratan is the second largest lake in Bali, and is the source of irrigation for rice fields and plantations across the entire Bedugul Village. The mountain on which it sits is often referred to as “the holy mountain” as the weather is cool and the soil rich and fertile. In early times, Lake Beratan was the largest lake in Bali, until a devastating earthquake occurred, dividing the lake into three sections: Beratan, Buyan and Tamblingan. The name Beratan comes from the word Brata, which means to conduct one’s self to fill the 9 primary needs in life. The word is used in the term “Tapa Brata,” which is to meditate and be united with nature.