The Kraton (also spelled keraton or karaton) or the Palace of Yogyakarta, is a grand complex that was meticulously planned to reflect the Javanese cosmos.

This elegant complex of pavilions was constructed based on ancient beliefs, of the connection between the God, human and the natural realms. Each feature holds a special symbolic meaning related to the Javanese worldview, who consider the importance of Mount Merapi and The Indian Ocean.

The Kraton was built in the center, facing directly north towards the majestic Mount Merapi. Its south side was built facing the Indian Ocean, believed to be the abode of Kanjeng Ratu Loro Kidul, the Queen of the South Seas and the mystical consort of the Sultan. This splendid example of traditional Javanese architecture has no equal. The basic and original layout of the main building of The Kraton began its construction during the reign of Sultan Hamengku Buwono I, in 1755 – 1756. 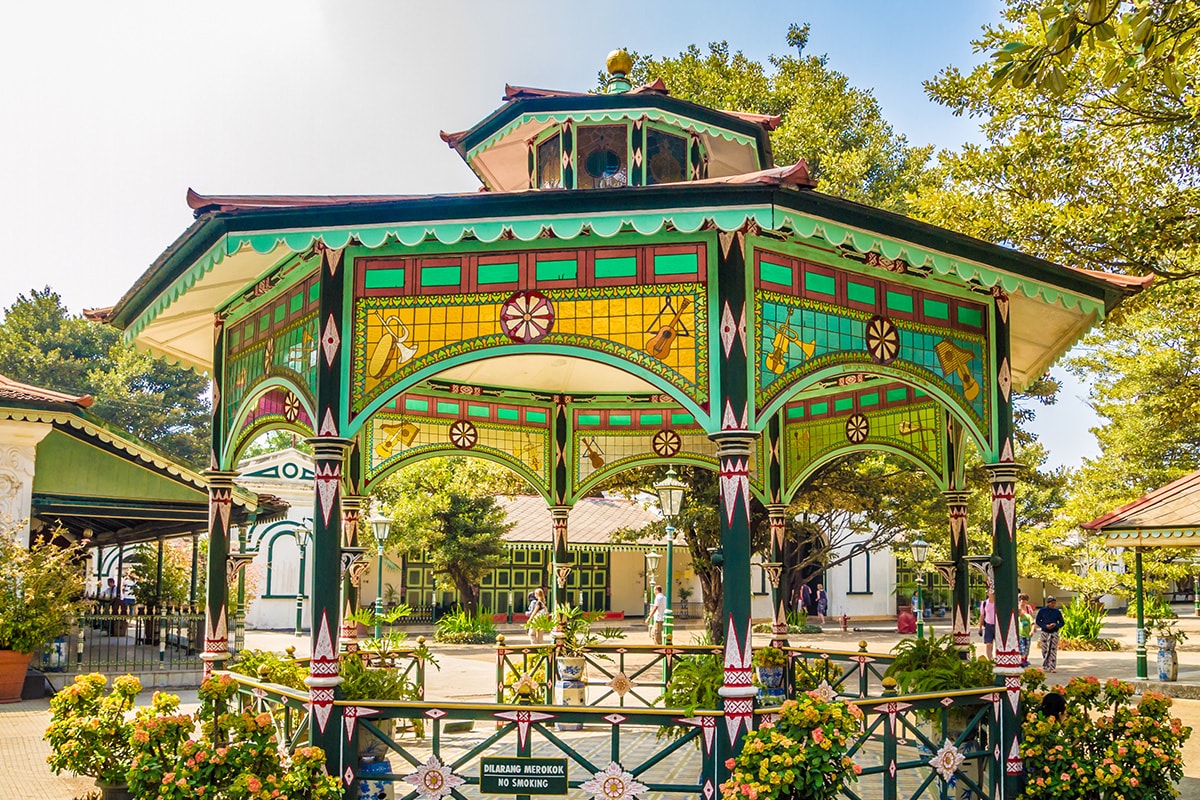 Other surrounding pavilions were then gradually expanded by the successor of the throne. The official symbol of the palace is named Praja Cihna. It depicts important elements that radiate a philosophical meaning. The Javanese lettering in the center is “ha” and “ba”, the acronym of Hamengku Buwana. The red is a symbol of courage and vigilance to value the truth, while the gold is a symbol of majestic splendor.

This palace was designed to be more than just a royal residence. It was built to be a focal point of the Sultan’s entire kingdom. When a sultan passed away, the cortege will leave by the southern gate and head its way to the royal cemetery located in Imogiri.

Today, the Kraton is a piece of living history and tradition. It continues to be used, both as a home of the Sultan as well as for other important ceremonial and cultural functions of the Yogyakarta court. Sitihinggil is the highest level of the Kraton area, where the formal ceremonies like the coronation are held. There are two Sitihinggil pavilions in the palace area.

Sitihinggil Lor is located on the north side and Sitihinggil Kidul is on the south side, that later was repurpose from the location of the army’s rehearsal point, to become a monument dedicated to mark 200 years of the Yogyakarta sultanate named Gedung Sasana Hinggil Dwi Abad. On weekends, you can enjoy art performances such as music, dance and the special wayang kulit or leather puppet show.

Near this building is the Alun-alun Kidul, a destination renowned for the festive evening ambiance and the mysterious Masangin tradition. Said to be an acronym of “masuk diantara beringin” or literally “entering between the beringins”, this is definitely one of the signatures local experience to try.
In this test, you will only need to walk between the two sacred beringin or banyan trees, and if you succeed, then you are considered to have a pure heart and will have any of your wishes granted. The only twist is, you have to be blindfolded to do it! 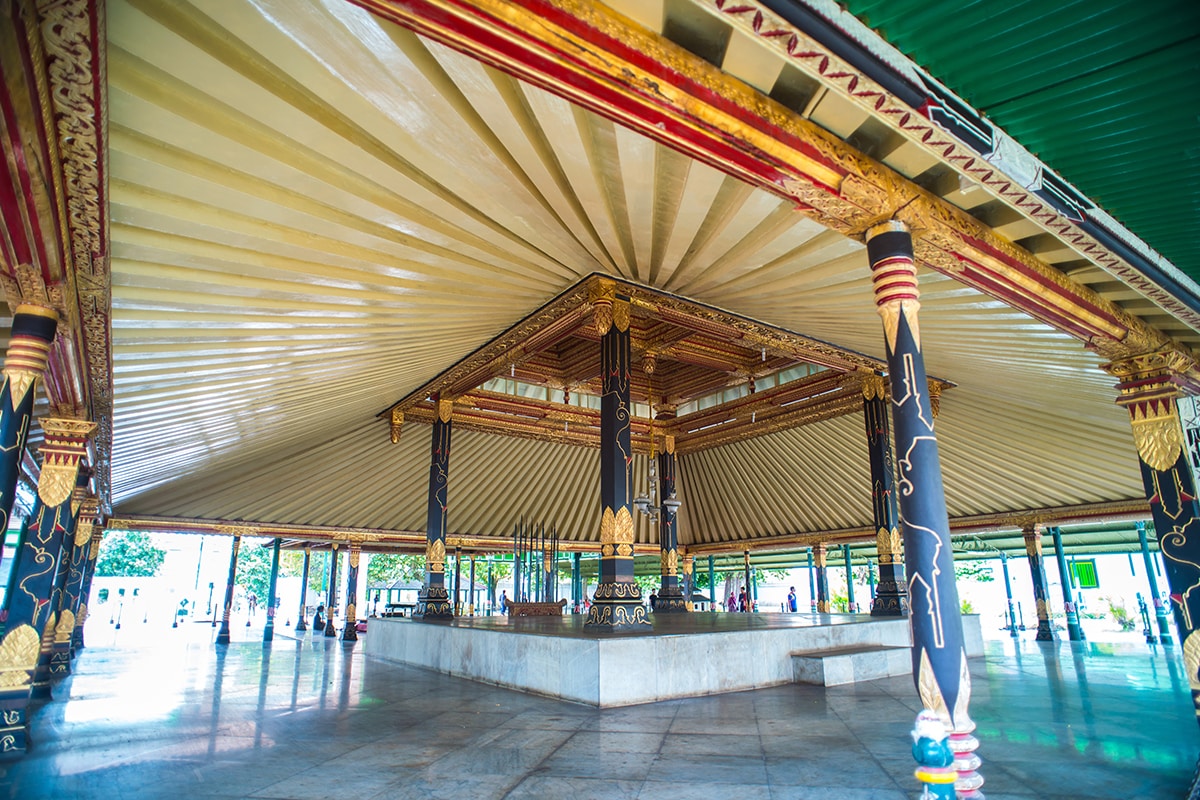 After a few tries, you can just linger in the open square and enjoy all the fun atmosphere surrounding this famous spot. In The Kraton complex, there are 7 specific zoning that consists of several pavilions, each with designated purpose and is separated by gateways. The sultan’s residence resides at the center Kedhaton area, named Kraton Kilen.

One of the interesting highlights inside The Kraton is The Hamengku Buwono IX museum. It holds a collection of memorabilia and significant items that belong to the late father of the currently reigning Sultan Hamengku Buwono X, who is also the Governor of the Special Region of Yogyakarta until this day. There are also painting museum, regalia museum, and royal carriage museum. Each of these beautiful royal carriages has specific names and interesting historical value. They are also used for special occasion such as the royal wedding ceremonies.

The Sultan’s title is not the only hereditary position in The Kraton. You can also meet the Abdi Dalem, who are the faithful caretakers of the royal households. This noble devotion is an honorable pride that is passed down from a generation to the next.

Even with Yogyakarta’s modernization nowadays, the Kraton of Yogyakarta continues to be respected by the people of Yogyakarta. Although the majority of Yogyakarta are Muslim, ancient tradition and mysticism still hold an important part of The Kraton’s rituals. 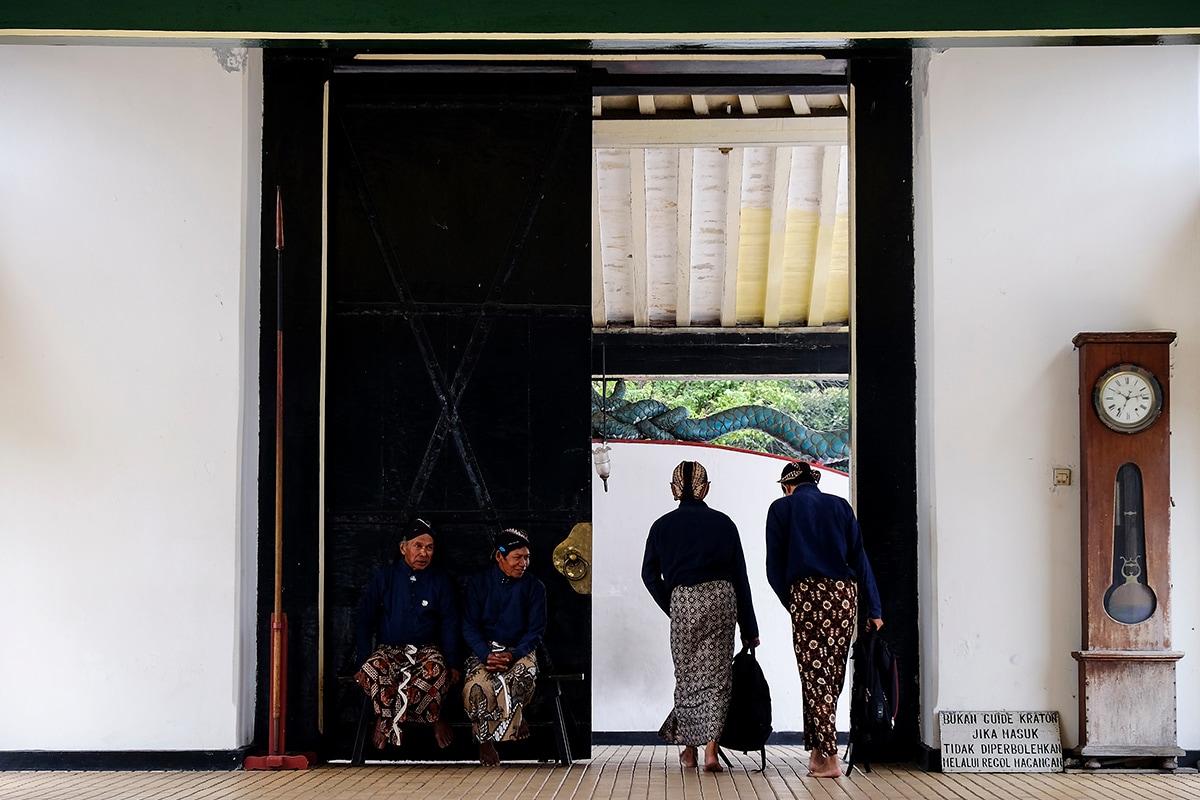 Periodically, special ceremonies are held to clean the sacred objects in the Royal collection. In the afternoons, after the palace is closed to visitors, women in traditional costume can also be seen respectfully sprinkling water and flowers on the pillars, lighting incense to cleanse The Kraton from impure intention and evil spirits.

Ujung Kulon National Park, One of the World’s Most Pristine Natural Ecosystem

With scarcely any human interference, the national park has a very well preserved ecosystem of flora and fauna. Its most precious feature is the one-horned rhinoceros (Rhinoceros sundaicus) or more commonly known as the Javan Rhino, which is regarded as the icon of both the national park and the province. This majestic creature is known as one of the rarest mammals on earth and is classified as critically endangered in the IUCN (International Union for the Conservation of Nature) Red List of Threatened Species.

Ujung Kulon National Park is one of only few areas which feature vegetation profiles from sea-coastal to tropical mountains. There are over 700 types of flora within the national park, of which 57 are classified as rare in Java and quite possibly the world. Among some of the flora that are known to grow solely in the area include the Batryohora geniculata, Cleidion spiciflorum, Heritiera percoriacea, and Knema globularia.

For centuries, the art of Wayang (traditional shadow puppets) has become an inseparable part of the lives of the people on the islands of Java and Bali and is a prominent part of Indonesian culture.

This long-lived art is among the world’s greatest story-telling tradition. It comes in the form of theater (wayang orang), three-dimensional wooden puppets theatre (wayang golek), and the most distinguished one: leather puppet shadow theatre (wayang kulit).

While wayang golek is mostly associated with the Sundanese in West Java Province, wayang kulit is the outstanding art of the Javanese in Central Java, Yogyakarta, East Java as well as Bali. Today Wayang orang and wayang kulit performances are still regularly held at the Keraton or Sultan’s Palace of Yogyakarta and Keraton Solo. In wayang orang, actors usually wear the mask of the character they portray, whereas, in the dramatic Ramayana dance legend which is regularly performed at the grand stage of the Prambanan temple, the masks are cast off. To watch this fabulous Ramayana ballet at its very best see this on full moon nights in the dry season between May through October, when the bright round moon shines directly on the elegant Prambanan temples, becoming an unforgettable backdrop to the riveting play.

Nonetheless, Wayang kulit is still the most well known Indonesian wayang performance. It is made of cow’s leather, meticulously chiseled with very fine tools, supported by carefully shaped buffalo horn handles and control rods. The art of creating wayang kulit is incredibly detailed. Several artists are usually involved in the different stages required to make one single puppet.

Visitors are welcome to observe and learn the intricate process in making wayang kulit in the Village of Kepuhsari, Wonogiri Regency, in Central Java.

The stories in wayang kulit are brought by one sole master performer called dalang, whorelates the story and at the same time does the voice for all characters, both male and female, the good as well as the bad.

He has a screen and a small oil lamp in front of him that throws shadows of the wayangs on the screen, while when not appearing, the wayang figures are stuck on a long banana stalk that can be easily taken up whenever the master needs them.

Tales in wayang performances are usually taken from the Ramayana or Mahabharata Hindu epics as well as from Java’s own history and legends, that usually involve moral and ethical dilemmas faced by the characters, following their journeys through life, love, and war. During the endless battle between good versus evil, they also contemplate the existential struggle between right and wrong. The means to those ends are not always clear cut. “Good” characters may possess negative traits and likewise, not all “bad” characters are entirely immoral. Whatever the circumstance, wayang stories always present philosophical ideas and poignant messages. 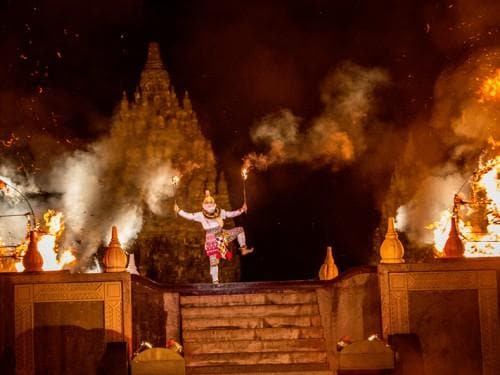 The stories presented in wayang kulit performances that are based on the classic Hindu Saga, are commonly known as wayang purwa (classical wayang). The performances refer to four cycles of epics, which were standardized by the royal courts of Central Java in the 18th century.

Wayang kulit performances are grand events that last throughout the night, accompanied all the while by a live traditional gamelan orchestra. During folk festivities and significant events such as births, weddings, or other celebrations, wayang kulit performances often appear with specific messages that are relevant to the event.

The art of Wayang has been inscribed by UNESCO as a Masterpiece of Oral and Intangible Heritage of Humanity.

Among the Gods at Dieng Plateau

The name ‘dieng’ which literally translates as ‘abode of the Gods’ says all you need to know about this collection small ancient temples set in the  remarkable volcanic landscape of the Dieng Plateau. The misty location, sulphurous springs and colored lakes truly make this a place of natural wonder and cultural significance. Come here and you will be transported back to ancient times. The temples are remnants from the glorious period of the Hindu empire in Java dating back to the 7th and 8th centuries. Standing on a plateau 2,000 meters (6,500 ft) above sea level, it is the extraordinary setting of these temples which make them most remarkable. It is believed that this place was chosen as the sacred location because of the spectacular landscape.

From the bubbling mudholes, brightly colored sulphur lakes and thick mist surrounding the plateau, visitors will easily understand why the ancient Javanese considered this place to be the seat of supernatural powers. Modern visitors to the plateau are enthralled by the unearthly beauty of this spot, with many finding it quite eerie.

Each of the small temples is named after figures in the epic tale of the Mahabharata such as Bima, Gatotkaca, Arjuna and Srikandi. It is believed that these temples used to serve as residences of Hindu priests who would spread Hindu teachings. The natural splendors of this location are fascinating. From lakes with green and yellow hues called Telaga Warna to the pristine waters of the reflective ‘mirror’ lake called Telaga Pengilon, the natural beauty of this spot is superb. The mirror lake is particularly impressive as it offers a perfectly reflective image of the landscape.  While, the impact of logging can be seen as many of the trees surrounding the lake have been cut down, it still remains an impressive natural phenomenon. Once you’ve walked to the top of the Dieng plateau you will feel like you are on top of the world. It will be difficult to know just where to look as the view from the plateau takes in steaming and colorful lakes, ancient temples and lush green landscape.