The Sebangau National Park in Central Kalimantan is one of the last remaining peat swamp forests in Borneo. The vast national park covering approximately 568,700 hectare is home to over 6,000 orangutans, forming one of the world’s largest populations in the wild.

Amidst the peat swamp forests, the National Park also offers beautiful scenery of pristine hills. From the top of Bukit Batu or Rock Hill, one overlooks the Sebangau National Park and all its fascinating scenery.

A long and challenging trek is available at Bukit Bulan or the Moon Hill. As trekkers make their way up the hill, they will be presented with refreshing trails along the Sungai Bulan, or Moon River. A unique ecosystem of peat swamp and granite rocks is observable at Bukit Kaki or Foot Hill. The granite rocks cause a dry environment, and thus the trees are different from those in the surrounding environment.

In the Sebangau National park are also crystal clear, refreshing, fresh water lakes. These lakes are also habitat to various species of fish and other distinct flora and fauna, and are the best place to watch nature‘s process at its finest. These magnificent lakes are known as Bulat Lake (Round Lake), Punggualas Lake, Jalan Pangen Lake, and Panjang Lake (Long Lake).

The Tjilik Riwut Airport in Palangkaraya serves flights from and to Jakarta and Surabaya. Once you reach Palangkaraya, you can use land transportation or rented cars which take about 20 minutes to Kareng Bangkirai (the Entrance to the Sebangau National Park), alternatively, you can take the Katingan river entrance, which is a 90 minutes drive from the airport. Keep in mind that public transportation may not be as many as those found in other parts of the country. So make sure you’ve made your travel arrangements prior to arrival.

Loksado, the Place where Culture Meets the Stunning Natural Landscape

Loksado is a sub-district of the Hulu Sungai Selatan Regency where the well preserved indigenous Dayak culture meets the stunning natural landscape. It is a lush landscape decorated with wonderful waterfalls, rushing rivers, and the enchanting culture of its indigenous people. This particular part of Kalimantan is home to the indigenous Dayak Meratus tribes–a sub ethnic group of the Dayak in Kalimantan that occupy traditional houses called Balai. Today, there are at least 43 of these Balai that can be found in 9 villages across Loksado. A Balai is a traditional wooden long house with tens of rooms measuring 3×4 meters and are occupied by tens of families.

Living closely with nature, the Dayak Meratus practice the Aruh Ganal Rituals that revolve around agriculture. Equally fascinating as the exotic Dayak culture are the Meratus Mountains themselves that are filled with natural splendors. The lush landscape is decorated with fascinating waterfalls, among which are the Haratai Waterfall, Riam Hanai Waterfall, Kilat Api Waterfall, Rampah Menjangan Waterfall, Pemandian Anggang Waterfall, and Tinggiran Hayam Waterfall.

There is also the Tanuhi Hot Spring where one can enjoy refreshing hot water. Its tropical forest moreover, holds other treasures where the exotic pitcher plant (Nepenthes distillatoria) and the endemic Meratus Orchid (Dendrobium hepaticum) grow.

The most exceptional feature of Loksado’s natural treasures is the Amandit River that runs through some of the most fascinating sceneries of the area. The winding river of fresh clear water decorated with rocks and creeks and unique traditional bridges that look to the lush green hills of Meratus are surely a sight rarely found elsewhere. To top it all, you should enjoy the magnificent scenery and exceptional sensation from a bamboo raft on the river.

The highway is paved all the way from Banjarmasin to Kandangan, but from Kandangan capital of Hulu Sungai Selatan Regency) the road narrows considerably. There is no public transportation from Banjarmasin or elsewhere, except from Kandangan but even this is not frequent. If your starting point is Banjarmasin, your best bet to reach Loksado is by renting car with driver. The trip itself will take approximately 4-5 hours.

Indonesia is a fascinating country in every sense of the word. Rich in culture, natural beauty and biodiversity. Home to the weird, the wacky and the wonderful. And just when you think you’ve seen and done it all, think again, for there is still a lot coming.

For a really exceptional sensation, how about swimming with jellyfish? Yes, you heardit right, jellyfish, the one sea creature that is most likely to give you stings, itches, and all kinds of unpleasant swimming experiences. Well, at Kakaban Island in East Kalimantan, you can , not only swim unharmed with this fascinating creature, but you can actually touch them since the island is one of only two places on earth where you can find stingless jellyfish.

Kakaban Island is a large coral atoll in the Derawan Archipelago in the Regency of Berau, off the east coast of East Kalimantan Province, covering 774 hectares of uninhabited terrain. Its most distinctive feature is a huge land-locked lake, which makes up almost two thirds of the island. This brackish lake is alive with several species of endemic marine life, including millions of stingless jellyfish that only exist in one other place on the planet which is at Palau in Micronesia. The island is shrouded among a tangle of dense mangrove forests, right down to where the water meets the earth. There are very few sections of beach, as most of Kakaban’s circumference end in a rocky wall of sheer limestone cliffs, some sections dropping hundreds of feet to the choppy waves below.

Kakaban Island is one of 31 islands belonging to the Derawan archipelago, which include Sangalaki, Maratua and Derawan. Kakaban was elevated through years of geological pressure, which eventually sealed off what was once a lagoon, creating the Kakaban Lake. “Kakaban” comes from a word in the local dialect meaning “hug,” because of the way the 9-shaped island “hugs” the lake in the center. Kakaban Lake has been declared a government nature reserve, and has been nominated as a World Heritage Zone.

The ecosystem of the lake is very similar to that of the open sea, but with a twist! The trapped sea-water diluted with rain water and ground water creates a unique habitat that has caused the creatures trapped inside to evolve! The lake has warm, brackish water of 11 to 17 meters in depth, and is carpeted in marine green algae. Four species of jellyfish crisscross the waters of Kakaban Lake, but unlike their counterparts beyond the coral wall, the lake-jellies have no natural predators, resulting in the evolution of the species to no longer need their venom as self-defense.

Other evolutionary processes have also taken place in this lake: The box jellyfish, normally one of the deadliest creatures in the world, in addition to losing its sting, it has shrunk to barely a third its normal size. The Spotted Jellyfish is no longer spotted, and the Cassiopeia swims upside down, with its tentacles to the surface. This is so the sun may shine on its algae-covered tentacles, creating a photosynthetic reaction and thereby producing food! Meanwhile, the white anemone has evolved into a passive jellyfish predator. Eight species of fish also dwell in this biological paradise, as well as sea cucumbers, sponges, crabs, snakes, and orange purple and yellow clams.

Marine scientists and geologists have long puzzled over the phenomena of the survival of plant and animal life in so isolated an environment, but as eloquently stated in the Jurassic Park Movie: “Life finds a way”, and Kakaban Island is the perfect proof of that. “Jellyfish Lake,” on Palau Island in Micronesia, is the only similar environment on Earth, housing two species of stingless jellyfish. Thus making Kakaban Lake not only the largest, but also the most diverse brackish lake in the world.

The recently expanded Kalimarau Airport in the town of Tanjung Redeb, in the Berau Regency now receives more flights including international flights. The airport sits at an elevation of 59 feet (18 m) above sea level. It has one runway designated 01/19 with an asphalt surface measuring 1,850 by 30 meters. The airport has 10,462 square meter domestic terminal, a 505 square meters VIP terminal, a 5,700 square meters international terminal, and 592 square meters cargo terminal.
Currently there are 4 airlines that serve flights to Berau: Garuda Indonesia, Wings Air, Sriwijaya Air, and Kalstar Aviation, connecting the regency with Balikpapan, Jakarta, Surabaya, Samarinda (East Kalimantan) and Tarakan, Malinau, and Nunukan in North Kalimantan. From Kota Kinabalu and Tawau in Malaysia, there are flights to Tarakan which connects with the flight to Berau.

Once in Berau you can hire a speedboat for the 2 hour ride to the Derawan islands. Speed boats generally have a seating capacity of 15 people, and can be rented to take you to several of the Derawan islands in one day. Boats can be chartered direct to Kakaban, but as there are no accommodations there, the usual routes go through its neighboring islands of Sangalaki, Maratua or Derawan. Kakaban is about 20 minutes from Sangalaki, 30 minutes from Maratua and 45 minutes from Derawan.
Now, Susi Air also serves Tanjung Redep-Maratua-Tarakan vice versa, however, the flight is only once a week and it is a relatively small aircraft for 9 passengers.

Located just away from the mainland of East Kalimantan in the district of Berau, the Derawan archipelago comprises 31 islands, most well known among these are the islands of Derawan, Maratua, Sangalaki and Kakaban. Here is Indonesia’s largest nesting site of the rare and endangered giant green turtles and hawksbill turtles, where one can daily watch turtles lay their eggs in the sand or swim to sea with the turtles. 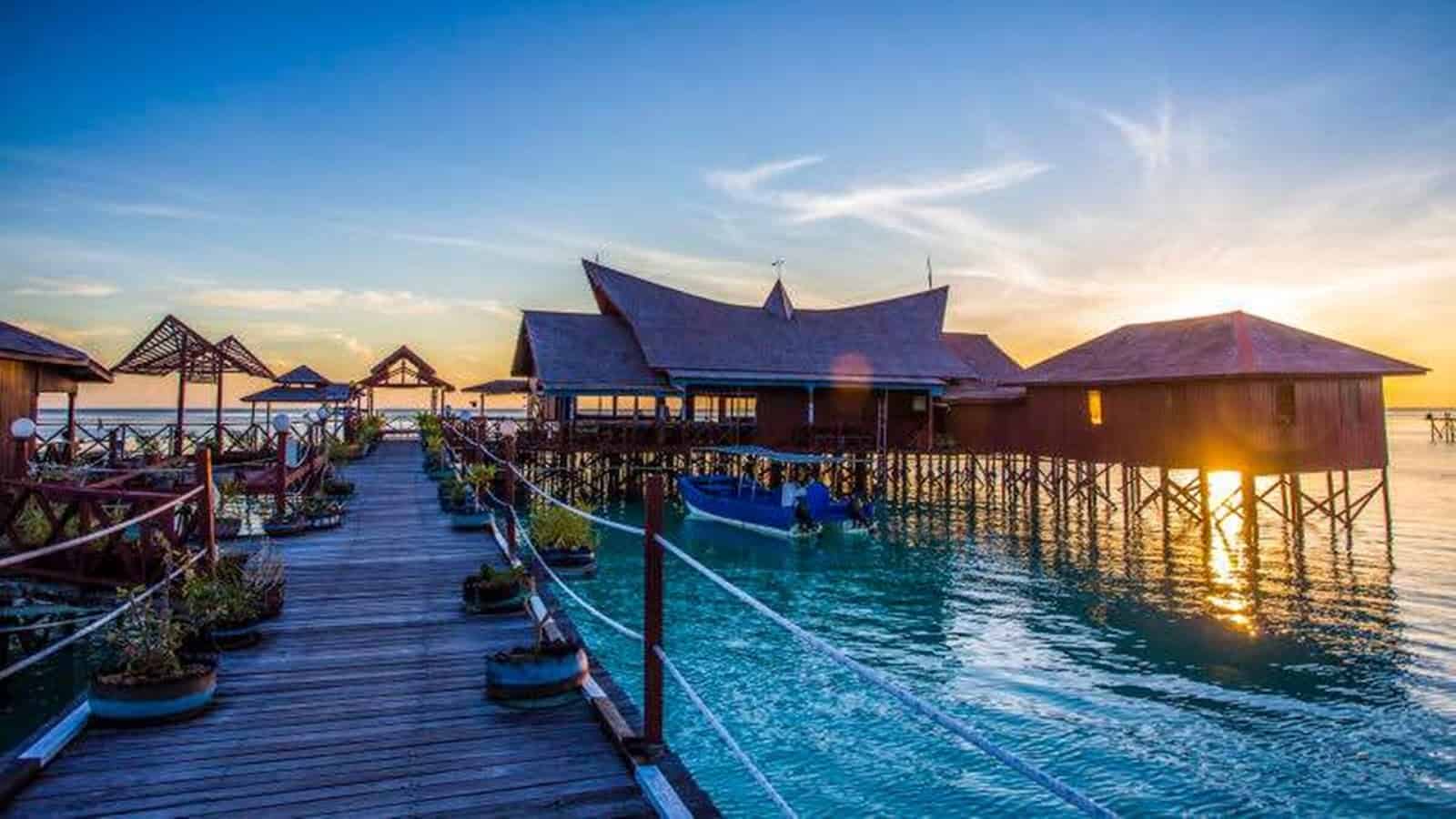 The entire marine conservancy region covers a total area of no less than 1.27 million hectares. It is the perfect tropical paradise with warm, isolated islands, soft white sand beaches fringed with waving palm trees, pristine seas that change color from green to deep blue, and an amazing underwater life of giant turtles, dolphins, manta rays, dugongs and barracudas, stingless jellyfish and sometimes, whales. Here, you can find 460 different species of corals, ranking this area second only to the Raja Ampat Islands in West Papua. The Nature Conservancy and a team of international experts also found more than 870 species of fish here, ranging from tiny pygmy seahorses to giant manta rays.