By attending the massive Baliem Valley Festival, visitors will have a rare chance to learn and experience firsthand the different traditions of each tribe participating in the Festival without having to make the difficult trek to their compounds deep in the hinterland of West Papua. During the festival, have your camera ready. Very often you will come across unique moments that you never want to miss.

A number among the more than a thousand war participants, do want to keep abreast with the outside world, so they adorn themselves with local regalia, while sporting flashy sunglasses: a personal ad of a trendy look meeting age-old tradition. Ask them politely to pose for you. It’s an unusual anachronism not to be missed. All you need to do during the festival is just observe and enjoy the mock war. The longer it gets, the nearer the spears and arrows get to hit the opponents. The closer the miss, the louder the roar from the hundreds of spectators. They have participated in these battles every year so that participants do get better each year.

After the Festival, visitors can go sightseeing to the Dani Market in Wamena, and visit the traditional Wauma Village that can be reached by car from Wamena. In Aikima see a 250 year-old mummified village chief, or, after a 2-hour climb, see the salt springs, where Dani women have, for centuries, made salt in a simple manner.

For your own safety, when intending to trek alone into the interior, you are advised to first report your itinerary to the Police upon arrival at the airport. A number of travel agencies regularly organize tours to the Baliem valley.

Wayag Island is one of the islands within the Raja Ampat district in the province of West Papua. The island is known for its beautiful atolls and amazing underwater life covering a total area of 155,000 hectares, about 383,013.3 acres. Here, you find pristine beaches with unique Karst islands that look like mushrooms sprouting out from the sea. Along these beaches, tourists can see fairy tale panorama, more captivating than Leonardo DiCaprio’s getaway in “The Beach”. The crystal clear waters around Wayag Island appear like unreal windows to various types of flora and fauna that live underwater.

Wayag Island never ceases to amaze. Divers, especially, have been overwhelmed not only by the rich underwater displays, but also by the panoramic beauty of the island as they climb up to its highest platform and observe coves and atolls around. It is a dream come true, truly a dream fulfilled. The island is 10 km north of the equator. Liveaboards are the best choice for travelers with a love for adventure and romance. Social contacts with other travelers will only be a call away. Dive briefings are enriching, so that just being there with other divers and the exotic looking staff, you will feel as if you are already drawn into the depths of Wayag’s surreal beauty.

How to get around in Wayag Island actually depends on where you are staying. So, plan your trip carefully and decide where to stay. If you choose to stay in one of the resorts on one of the Raja Ampat Islands, you will  need a boat to visit Wayag Island. But if you choose a liveaboard package, you just need to sit back and enjoy the breeze in your cabin and let the schooner pass the beautiful islands.

Liveaboard packages are a comfortable alternative, and you can find these boats in Sorong, or as far away as Bali which is their  marketing hub and port for businesses offering dive packages. Some of the liveaboards are very luxurious, and some are unique and quite fantastic. The facilities are inclusive. Many agree that liveaboards are indeed the best alternative considering time and convenience. At around US$ 300 a day, this is actually good value for money. Liveaboards usually run 10 day cruises out of the port of Sorong, in West Papua.

It will not take a long time to travel around the unique beaches of Wayag Island. But it takes very good physical condition to enjoy the beautiful panorama from the top of an atoll, as you must climb the atoll’s steep walls for about 30 minutes.

A dinghy is probably the best means to go island hopping in a day. It is a beautiful interruption between your diving, sleeping and eating routine on your vacation in the Raja Ampat Islands. When hiring a speedboat as alternative, observe the surrounding islands and stop at the clear water to cool yourself after a long hour of the fast seafaring trip. Taking a speedboat is convenient as you can decide your own program.

Locals who still remember World War II would tell visitors that back in 1944-145 Morotai was a hive of military activities with tens of sorties roaring daily from aircrafts taking off and landing at airstrips along Daruba Bay,endless stamping of thousands of military boots marching across the island, and navy ships anchoring daily carrying supplies and reinforcement. For Morotai back then, was the strategic base of the Allied Forces from which they attacked posts in the Philippines and Borneo in their fight against Japanese forces during World War II. 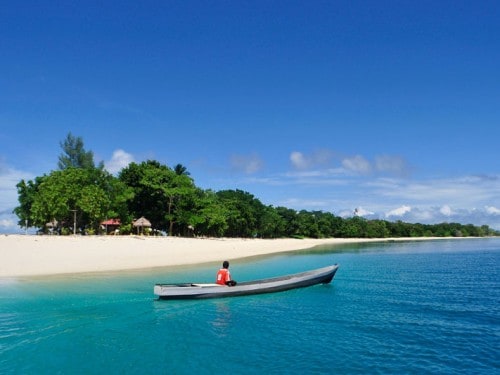 On 15 September 1944, Allied Forces from the USA and Australia under leadership of Supreme Commander for the West Pacific, General Douglas MacArthur, landed on Morotai’s south west corner, where some time before, the Japanese had constructed an airstrip but abandoned it in favor of the island of Halmahera to its south. In Morotai the Japanese command left only some 500 soldiers to guard the island. With such overwhelming odds, the advancing Allied Forces were no match for the small number of Japanese troops. The Japanese Navy later tried to recapture the island but also to no avail.

When the Japanese abandoned Morotai, Gen. MacArthur saw this as the golden window of opportunity to take the island which he considered was at the most strategic location for a counter invasion to recapture the Philipppines from the Japanese. With over 50,000 troops the Allied Forces settled on Morotai. Losing no time, Mac Arthur immediately constructed a number of airstrips over the rough coral ground. At one point, Morotai was said to house no less than 60,000 soliders, and had a large hospital with 1,900 beds. There was also a busy naval base nearby. 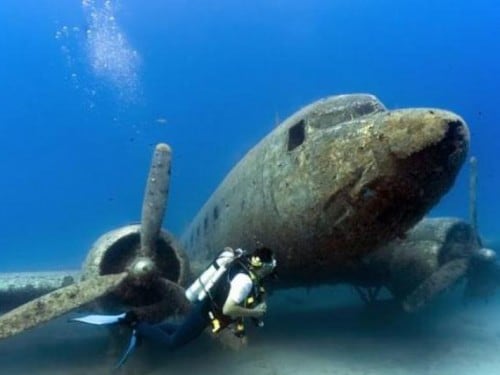 Later, Australian Forces also sortied from Morotai to stage attacks on North Borneo.  This hive of activities continued until the end of World War II at the surrender of the Japanese in 1945. Before leaving the island, Allied Forces are said to have burnt down all constructions on Morotai.

In 1974 a lone Japanese soldier called Taruo Nakamura emerged from the jungles of Morotai having hidden there for decades unaware that the War was long over.

Today, Morotai has become a vague memory in the annals of World War II military operations in the Pacific Theater, and its role in the fight for freedom of the Philippines almost forgotten.

The island itself with a total population of 53,000 people is now back to its routine as sleepy tropical paradise. Nevertheless, its decisive role in World War II is forever etched in history books. 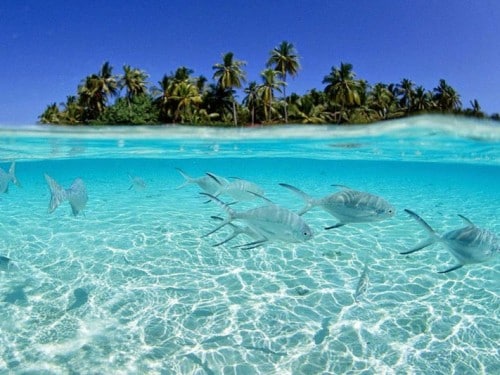 Now the government plans to make Morotai into an economic hub and gateway into Indonesia from the Pacific Ocean. Morotai will be developed as a fishery, tourist, trade and services center.

The island of Morotai has now been designated as one of Indonesia’s Top Priority Tourist Destination for intense resort development.

Where in the world is Morotai?

Located north of the larger island of halmahera in the province of North Maluku, the island of Morotai has a number of great beaches and interesting diving spots. The largest town here is Daruba in the south. To Morotai’s north are the Philippines, to its east the Pacific Ocean. Not much remains to be seen from those hectic World War II days, except for a number of interesting wrecks to be explored underwater. 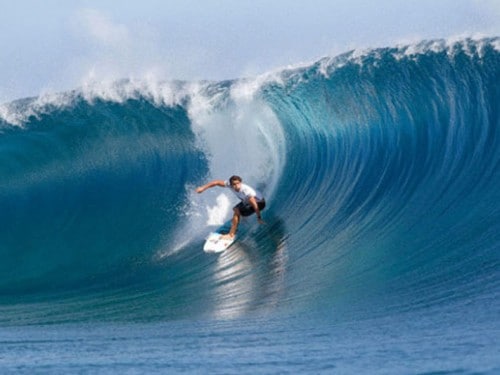 A lone statue of General Douglas MacArthur on the island of SumSum near Daruba serves to remind following generations that this famous general, best known for his words “I will return”, once made Morotai his military base.

Nearby at Kao Bay in Halmahera a half submerged Japanese wreck named the Tosimaru can still be seen from shore.
A shack filled with memorabilia of World War II collected by a private citizen and known as the Morotai Museum can be visited to remind visitors of those terrible war days, which will hopefully never occur again on this planet.

Besides serving as US and Australian military base in WW II, the island of Morotai later also served as base for Indonesian forces in the liberation of West New Guinea from Dutch colonization.

High up in the mountains of central Papua at an altitude of 1,600 meters above sea level, hemmed in by steep green mountain walls, lies the stunningly beautiful Baliem Valley, home of the Dani tribe. Baliem valley is 72 km long, and 15-31 km wide in places. It is cut by the Baliem River, which has its source in the northern Trikora Mountain, cascading into the Grand Valley, to meander down and further rushing south dropping 1,500 meters to become a large muddy river that slowly empties into the Arafura Sea. The first outsider to discover the valley was American Richard Archbold, who, on 23 June 1938 from his seaplane, suddenly sighted this awesome valley dotted with neat terraced green fields of sweet potatoes, set among craggy mountain peaks. This is Indonesia’s own Shangri-La.

By trekking, you can witness traditional ceremonies, traditional markets and the way of life of the  Dani. There are a very limited number of restaurants inside the Baliem Valley. Your tour guide can bargain with the Dani people to provide you with simple meals.

It’s strongly advised that visitors bring their own meals and snacks during trekking through and around Baliem Valley. Meals and snacks can be bought at grocery stores in Wamena. To make your trip easier and to get the most value, it is advisable to find a packaged tour offered by several operators.