The Dambulla Cave Temple is traced to the 1st century BC, and is the most treasured cave temple in Asia. It has five caves under a vast rock that overhangs the temple. On the underbelly of the Rock is carved a drip line that keeps the interiors dry.Inside the caves, the ceilings are adorned with intricate patterns of religious images meticulously painted following the natural contours of the rock. Images of the Buddha and bodhisattvas and gods and goddesses are to be seen inside.The cave monastery remains the best-preserved historical structure in Sri Lanka that dates back to the 2nd and 3rd centuries BC. It remains to this day a living Shrine that draws thousands of devotees and curious visitors.

The temple has five caves imaginatively converted to shrines. The caves built at the base of a 150m high rock during the first century BC to 993 AD and between 1073 -1250 are the most inspiring cave temples of the many cave temples in Sri Lanka. You reach the cave temple by walking on the gentle slope of the towering Dambulla rock that gives you a magnificent view of the plains below with the Sigiriya rock fortress emerging out of the flat landscape. No doubt you will have Homeric thoughts because a Sri Lanka Holiday is the most enjoyable odyssey you can make in Asia.

Sigiriya is both a palace and a fortress of stunning splendor, and is a tribute to its ingenious builders. Lest we forget to the King who wanted a Sri Lanka Holiday deal in a palace built on the flat top of a rock with a terrace and a mirror wall. The entrance is at mid level, through the Famous Lion gate that gives Sigiriya its name makes it the perfect tailor made holiday Sri Lanka. The frescoes of Heavenly Maidens -some twenty, sensuously captivating beauties who have survived out of nearly 600 date to the time of the playboy King Kashyappa, narrate in paint the pleasures of a pristine past of a land that you have chosen when you decided on your Sri Lanka vacation.Sigiriya is an architectural marvel and a classic example of urban planning in the first millennium. A park laid out on a symmetrical plan to appease Royal indolence and water retaining structures with ingenious surface and subsurface hydraulic systems will surprise you, as most of them function to this day. 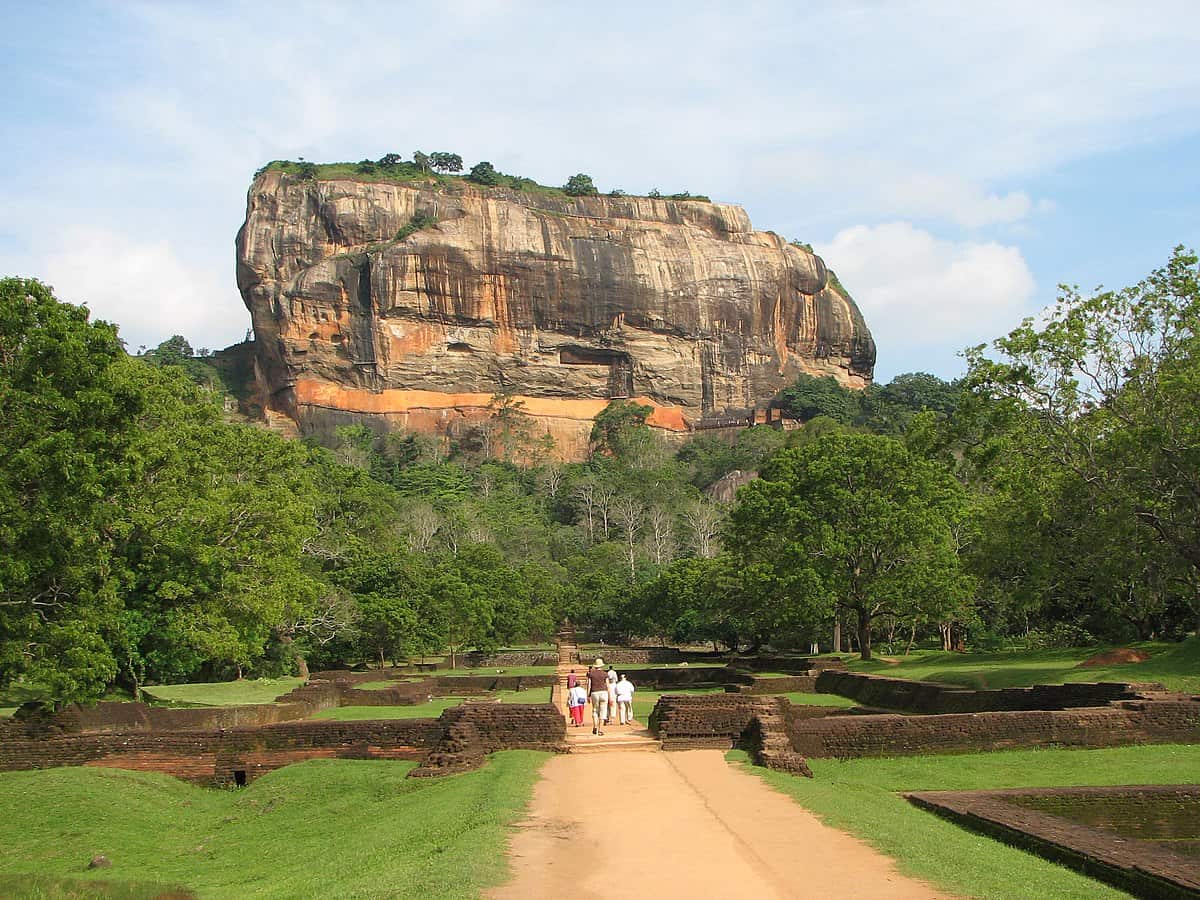 What will enthrall you most are the frescoes and the mirror wall graffiti. Together they narrate a story painted and etched of the genius of a people who lived and loved with passion. They surpass the guest comments you will read of the most fastidious of Boutique Hotels in Sri Lanka.

The Frescoes – are drawn in a style considered unique. They radiate an ethereal beauty that seduces your senses with a grace that is exquisite despite its antiquity.The Mirror Wall- It is said the Mirror Wall was so polished that the King could see himself when he passed through the ornate terrace in the sky. Its surface suggests that it is made of some form of porcelain. The mirror wall has verses dating from the 8th century wherein they wrote on love, irony, loss and grief.The Gardens of Sigiriya is one of the oldest landscaped gardens in the world.The Lion’s Mouth – is the entrance to the palace, with its giant paws still intact. A guide for you to imagine the enormous edifice that it once was and still is on the Sri Lanka Map.

Anuradhapura is one of the island’s most famous ancient cities, firmly in place in any tours in Sri Lanka.The ancient ruins predating the Christian era puts Anuradhapura in the pantheon of human history along with Athens, Alexandria and Patalipurhra. It depicts the trajectory of the Sinhalese civilization from the time it was founded in 4th century BC.The Mahavamsa, the historical chronicle affirms that the city was founded in 380 BC. The capital city of Sinhala Kings of Sri Lanka suffered, survived, was razed to the ground and was rebuilt as most other cities whose prosperity and the envy of rulers in its proximity was a recipe for recurring disasters and innovative engineering in reconstruction.The past grandeur is narrated by a fascinating collection of ancient ruins some of which have been painstakingly restored. The remote past of a majestic capital and a monastic city of benevolent kings, despotic monarchs, retreating rulers and heroic conquerors reach out to you from Sri Lanka history.The Dagoba – Thuparamaya was built by King Devanam Piya Tissa in 3rd century BC to enshrine the clavicle of the Buddha, considered a sacred relic that was gifted to the King by the Mauryan Missionary Emperor Asoka. The city was conquered and sacked by Pandyan kings in the 9th century. The destruction in AD 993 by an invading Indian King brought an end to the city as the capital of Sri Lanka. Close to Anuradhapura is Mihintale, the oldest and the first wildlife sanctuary of all mankind. The story goes that King Devanam Piyatissa who was a deer hunt when he found Arahant Mahinda and by royal edict declared the entire area as a protected reserve a tradition that continues to this day. Other than Mihintale, there are more than 14 protected wild life parks you can visit on your Sri Lanka trip.

The oldest tree in the world adorns this city of shrines. It was brought from India in the 3rd century BC. Its sanctity rests on it being grown from the Bo Tree (ficus religiousa) in Bodhgaya India. Under the shade of the parent tree, the Ascetic Siddharathe sought enlightenment.The relicts of the Buddha enshrined in Stupas or Dagobas have thus determined the topography of Anuradhapura.Your holiday in Sri Lanka needs to an enriching experience. Find the answer to the question “can man escape his destiny?” Yes. See the Samadhi Statue of the Buddha, matchless in the intense serenity that it radiates.Can a royal bath be made as ornate in its scale and beauty as that of a cathedral? Yes, See the twin ponds. To learn about Sri Lanka is to learn about the genius of man.

The oldest tree in the world adorns this city of shrines. It was brought from India in the 3rd century BC. Its sanctity rests on it being grown from the Bo Tree (ficus religiousa) in Bodhgaya India. Under the shade of the parent tree, the Ascetic Siddharathe sought enlightenment.The relicts of the Buddha enshrined in Stupas or Dagobas have thus determined the topography of Anuradhapura.Your holiday in Sri Lanka needs to an enriching experience. Find the answer to the question “can man escape his destiny?” Yes. See the Samadhi Statue of the Buddha, matchless in the intense serenity that it radiates.Can a royal bath be made as ornate in its scale and beauty as that of a cathedral? Yes, See the twin ponds. To learn about Sri Lanka is to learn about the genius of man.

Jaffna is one of the oldest human settlements in the peninsular region of Northern Sri Lanka. The city was the epicenter of a decade’s long conflict that has now ended. An old resident says in his blog “the quiet nostalgia for a gratifying past puts a faint smile on the granite brought in for reconstruction.” Reconstruction of the city and the return of its residents to the once vibrant economy are captured in canvas by an acclaimed artist. He notes “…continual transformation is the process that cities need to endure when they emerge in to new life once again.” That canvas unfolds before your eyes on your Sri Lanka vacation when you visit the Jaffna peninsula and the colourful offshore islands that surround it. Once the 2nd largest Sri Lankan city, it was also an important Portuguese colonial hold. The Dutch Fort that still dominates the Jaffna skyline is spread over an area of 22 hectares within the city limits. The star shaped Jaffna Fort built in 1680 by the Dutch is considered as the best example of Dutch fortifications in Asia.

In Delft Island (Neduntivu islet) 35 kms from the city is the Delft Fort built by the Portuguese. Behind the Fort is a beautiful beach with exquisite shells. A ferry service connects the largest island in the Palk straits with the mainland. The architecture of the Kandaswamy Kovil in the Nallur quarter of the city has been built in the South Indian Dravidian style. The shrine which stood on the site before its destruction by the Portuguese dates back to the 10th century.At Kantarodai, there are about 100 miniature dagobas or stupas crowded in to an area of about one hectare. The diameter of the largest stupa is approximately 4 meters. These are believed to be 2000 years old.Nagadeepa is a small island an hour’s journey by boat from the city. The Buddhist temple recently restored is a temple revered by Buddhists of Sri Lanka who believe that it was visited by the Buddha.