The Lembeh Strait in North Sulawesi is world famous for its wonderful, photogenic underwater critters. In fact, the Strait is only a long and narrow strip that separates the mainland from the Lembeh Island. But look closer and dive into its blue waters and discover a completely different world filled with fascinating and most colorful tropical underwater life that is loved for its wide range of small critters.

Administratively part of the municipality of Bitung, the harbor town of Manado, capital of the province of North Sulawesi, the Lembeh Strait stretches 16 km long and is only 1.2 kilometers wide, yet in these narrow waters no less than 88 diving spots have been discovered. Although Lembeh Strait is not as world renowned as the Bunaken National Park, one should in no way underestimate its outstanding beauty.

Dive sites here go to a depth of of between 15 to 25 meters. There are hardly any currents, and throughout the year the waters remain a warm 24 to 30 degrees Centigrades only. Its visibility is not too clear reaching between 4 meters to 20 meters only when one happens to be lucky, since its floor is sandy, and there are few corals.

Strangely enough this area is habitat to giant fish that are found almost nowhere else on earth. But among professional divers, the Lembeh Strait is better known as “The Best muck-diving site in the world”.

Its unique ecosystem has made this the home of nudibranch, flamboyant squid, and mimic octopus to furry frog fish. Their exceptional beauty have made these creatures rare subjects for underwater photographers. For this reason marine photographers the Lembeh Strait is also known as “The Mecca of Macro Photography”.

Aside from this natural wonder, from its surface the Lembeh Strait remains used as a harbor for local transport, fishery, marine industry, tourism and as a natural laboratory.

On a hill by the coast of the island of Lembeh stands the Trikora (Tri Komando Rakyat) monument and a DC3 aircraft of the Indonesian Air Force, in commemoration of battles held towards the end of the 1980’s in the fight to recover the territory of the former Dutch East Indies’ Papua back into the fold of the Republic of Indonesia. The port of Bitung was the air base from which fighter planes made their sorties to Papua. From this location one can have a panoramic view on the Strait of Lembeh.

Ke’te Kesu’ is a quaint, traditional village concealed in the mountainous region of TanaToraja, South Sulawesi. It sits amidst a vast expanse of rice fields, and is the oldest village in the Sanggalangi district. The village is over 400 years old, and is said to have not changed at all in the last 400 years. Ke’te Kesu’ functions as a sort of living museum, where one can experience first-hand the culture and traditions of the ancient Torajan people. Kete Kesu is probably most recognized for its fascination with death, as shown through their extravagant funeral ceremonies, hanging graves and decorative burial sites. The Ke’te Kesu’ are said to have the most well-preserved megalithic culture and death-celebrating traditions in all of Toraja.

This timeless town is home to about 20 families. It is comprised of eight “Tongkonan”, set in rows facing each other, complete with connected rice barns. The walls of the Tongkonan are adorned with beautiful carvings and buffalo horns, which serve as a mark of the homeowner’s status. A Tongkonan is the traditional house of the Torajan people, distinguished by its oversized boat-shaped roof. The construction of Tongkonan is a laborious task, and usually requires the help of all family members. In the original Toraja Society, only those of noble blood were given the right to build Tongkonan, while the common people lived in smaller, less elaborate houses.

Not far behind the Tongkonan, menhirs rise from the rice fields, marking the way to the eerie hill of Bukit Buntu Ke’su. Bukit Buntu Ke’su is an ancient burial site, estimated at over 700 years old. The rocky hillside is scattered with human skulls and bones, some piled high into large canoe-shaped vessels. The face of the cliff is hollowed with caves, which are ancient crypts. The caves were carved by masters of their skill, and take many months to make.

According to tradition, those of noble status were buried in higher holes, while commoners rested at the foot of the hill. Torajans believe that the higher one is buried, the easier the pathway to Paradise. Haunting, life size tau-tau, which are effigies of the dead, perch high across face of the cliff. Built to resemble the deceased, they stand watch outside each tomb, as symbols of each cave’s “inhabitants.”Some of the tombs are secured with iron bars to prevent the theft of these. Coffins also hang from the walls of the hill, shaped in various forms of dragons, pigs, and buffalo. The wooden crates were engraved with great accuracy and beauty, but are now crumbling with age.

The people of Ke’te Kesu’ are renowned as highly skilled craftsmen. Unique ornaments of bamboo and stone are carved in abstract and geometric patterns, seemingly without the use of mathematical calculations. Many souvenirs can be bought in and around the Ke’te Kesu’ village including coasters, jewellery, wall hangings, tau-tau, and even traditional weapons. Coasters, bracelets and necklaces are sold for a few thousand rupiah, while intricate wall hangings and engraved paintings can be priced at a few million rupiah.

One of the Tongkonan has been converted into a museum, displaying strange, historic objects of ancient customs. Chinese ceramics, sculptures, daggers and machetes, and even a flag, said to be the first flag flown in Toraja. The Museum also conducts bamboo craft workshops for those who would like to try their hand at this skill.

Togean Island. A community – based ecotourism as well as in conserving the biodiversity. A bewildering array of tropical rain forest covered six islands formed by volcanic activity. Situated in the vicinity of equator. This enchanting archipelago is one of the jewels of Central Sulawesi. Stunning reefs, small isolated white sandy beaches, traditional fishermen village of a Bajau, verdant rainforest have left many a world weary travel searching for superlatives.

Manado Tua (Old Manado) Island, together with the islands of Bunaken, Siladen, Mantehage and Nain form the Bunaken-Manado Tua Marine National Park. The Park lies just off shore from the city of Manado, capital of the province of North Sulawesi. Covering a total of 89,065 hectares, the Bunaken-Manado Tua park is among the most spectacular dive sites in the world. The islands are separated from the mainland by a submarine trench that reaches a depth of 1,200 meters, and keeps these waters relatively free from city garbage and silt. The reserve is protected by law from spearfishing and coral or fish-collecting, as well as from dynamite fishing. 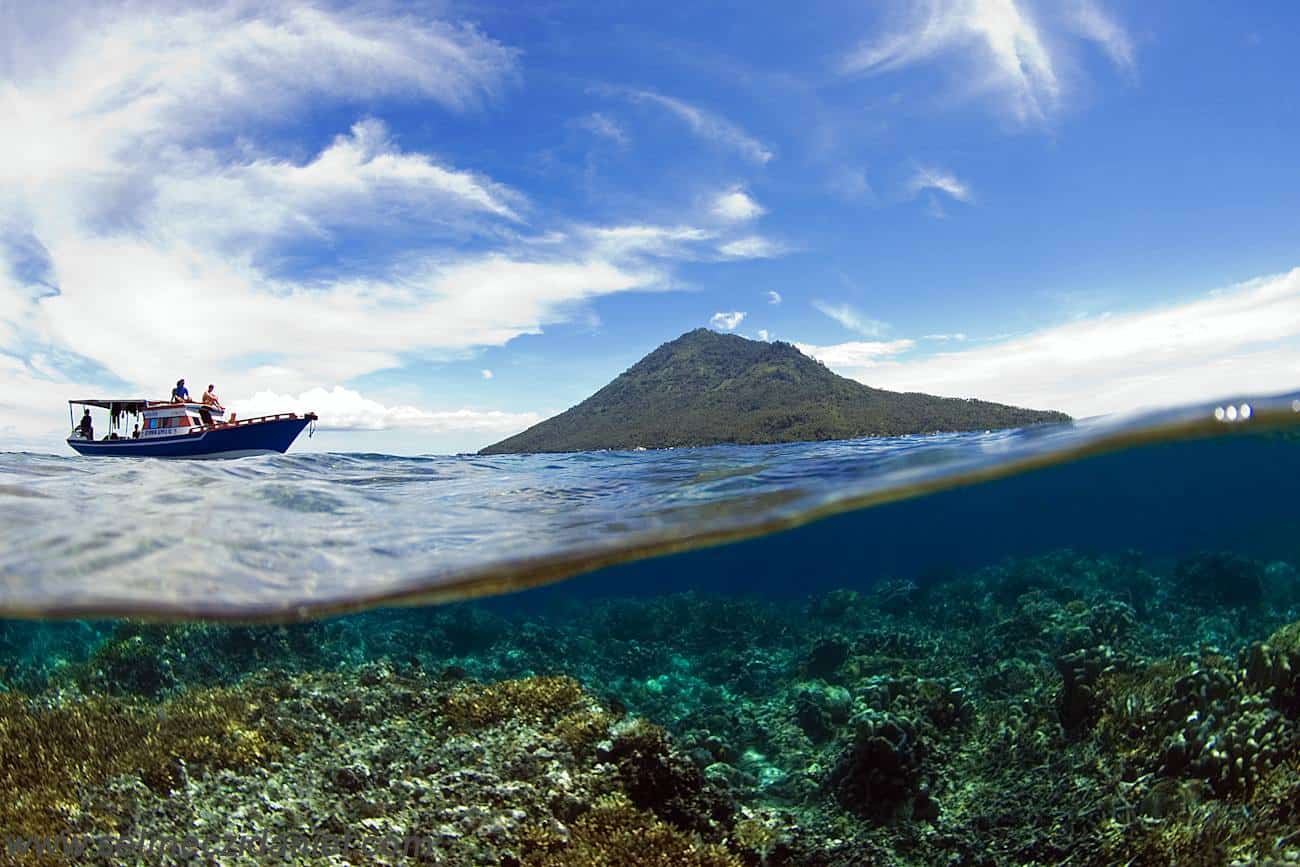 The island has some 3,200 inhabitants forming a tight-knit community of farmers and fishermen from the Sangir region. This community has been actively restoring damaged reefs with the assistance of Seacology. Around the island are underwater plateaus sloping from 5-30 meters, fringed by vertical coral walls plunging 25-50 meters down, and large caves with hanging coral reefs: a truly amazing sea garden.