Long hidden in the shadows of its more famous neighbor Bali, the island of Flores is emerging as a unique destination in its own right. Not only is Flores in the East Nusa Tenggara Province, a staging point to your adventure to Komodo Island, -the lair of the dragons, – Flores is also blessed with an abundance of wonders such as the Tri-colored Lake of Mt. Kelimutu, the Liang Bua Cave archaeological site, and traditional villages like Bena and Compang Ruteng. With over 50 spectacular dive sites, Flores is a paradise for divers and underwater enthusiasts. The island is also surrounded by beautiful beaches with soft pearly white sands.

In addition to these popular attractions, there is still a side of Flores that should yet receive more spotlight: its culinary treats. This island also has various scrumptious traditional food, snacks, as well as delicious drinks that will complete your total adventure

Here are some of the tasty traditional foods and drinks on Flores:

Ubi Nuabosi is a type of sweet potato which is very popular on Flores. The sweet potatoes are processed in a variety of ways, the may be boiled, fried, or roasted. The people of Flores usually serve these together with dried salted fish or other dishes. Here, Ubi Noubosi is a source of carbohydrate an acts as an alternative to rice.

Jawada is a traditional sweet snack of Flores that takes the shape of a triangle with a lovely golden brown color. Composed of thin pasta not unlike glass noodles, Jawada resembles curly hair, from which it got its nickname as the “hair cookie”. Jawada is made from rice flour, palm sugar, coconut milk, and salt. The dough is pushed through small holes made on a coconut shell to create the thin hair-like shapes. The dough is then deep fried, so it can maintain its crispiness. 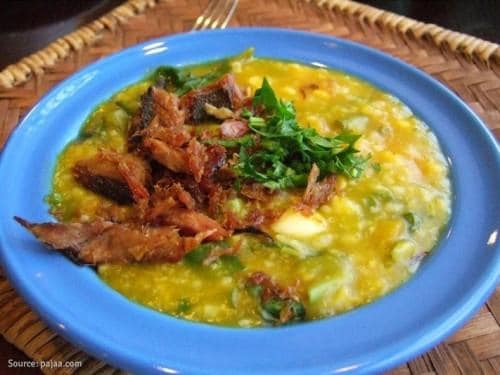 Literally translated, “Tapa” means roasted or barbequed, and “Kolo” means rice in a bamboo, so in simple terms, Tapa Kolo is rice which is put inside a small bamboo and then cooked over an open fire. This is a special dish that is usually served for traditional rituals and ceremonies as well as other events. Not just regular rice is used, the rice for Tapa Kolo is a special red rice which locals calls “Deal aka”. Tapa Kolo is usually served with chicken, pork, or other meat. For meat lovers, Se’i is the perfect treat. Se’i is smoked meat cooked in the traditional methods in Flores. Se’I usually uses Beef or pork, but sometimes fish is also used. To make Se’I, the meat is placed over an open fire at a heightrelatively higher than barbequing. This way, it is not the flame that cooks the meat, but the hot smoke. For this reason it takes longer to make Se’I as when compared to barbequing meat. The locals usually slice the freshly smoke meat and eat it right away or cook it again mixed together with a variety of vegetables. A traditional drink of Flores is Moke, considered by the people of Flores as symbol of friendship and hospitality. The drink is made of palm nectar which is distilled and processed using traditional techniques. There are two types of Moke which are the White Moke and Black Moke. White Moke is made from tapped palm nectar, while the Black Moke is White Moke which has undergone further distilling process which increases its alcohol content and turns it into a liquor, specialty of Flores.